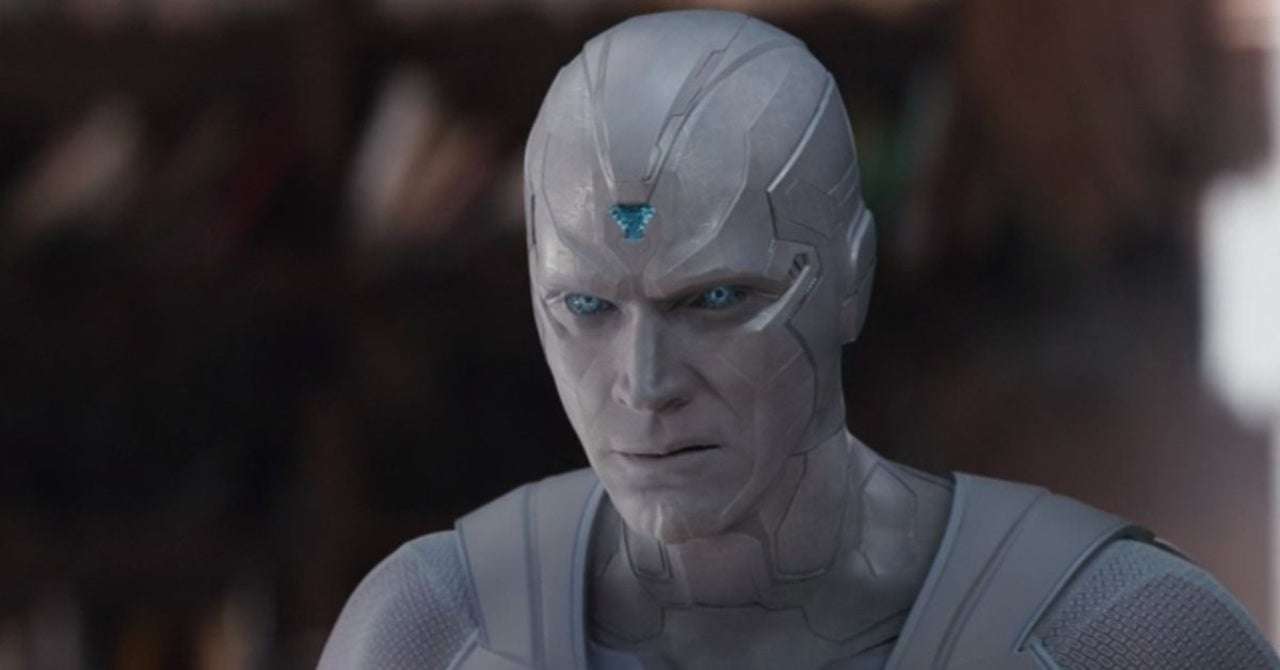 WandaVision had a lot of ground to cover in its finale, what with the Skrulls and the child death and the explaining-what-“you’re-the-Scarlet-Witch“-means of it all. Among the episode’s biggest twists, alluded to in the post-credits scene from the week before, was the climactic round of Rock ‘Em Sock ‘Em Robots in the sky above Westview.

The showdown between the various versions of the Vision (Paul Bettany) was a final confrontation in the tradition of Marvel‘s best third-act donnybrooks.

It was all made possible by Director Hayward (Josh Stamberg) and his crack team of S.W.O.R.D scientist Frankenstein, who audiences had recently learned spent the last five years pulling Vision’s body apart and putting it back together. The result was what we’ll call White Vision, the soulless, 0% Mind Stone shell of a synthezoid who — wait for it — pales in comparison to the original.

While the Vision that audiences had spent the last eight episodes with was revealed to be a construct of Wanda‘s imagination and abilities, this was the repurposed corpse of the hero first introduced back in Age of Ultron, minus the personality and appreciation for paprikash.

White Vision comes straight from the comics, where he premiered under similar circumstances during the events of the VisionQuest storyline back in the ’80s. When regular Vision was disassembled by unscrupulous folks, his reassembled form came out of the proverbial oven without emotions or color saturation. What happened next might offer us some clues as to what we can expect from this, the MCU‘s latest in a long line of tortured heroes.

In WandaVision, eyes are the windows to the soulless machine

By the end of WandaVision‘s final episode, the conflict between the Scarlet Witch‘s idealized version of her dead beloved and the cold, unfeeling reality had been brought to a close. The weapon of choice in the conflict was, naturally, logic. Well, first skull lasers, but then logic after that.

Westview Vision determines that his adversary is the component pieces of his old body, reassembled but robbed of memories. Concluding that he can’t truly be Vision without the experiences that moulded him, Westview Vision jacks into the monochrome synthezoid’s brain, implanting everything that the character had been through so far: Shuri‘s diagnostics, the fight with Ultron, the battles leading up to the Sokovia Accords, and his death at the giant purple hands of Thanos.

Importantly, we don’t see any of the memories of his time in Westview. What we do see is the time-honored visual shorthand for a bad comic book character turning good — White Vision‘s eyes change color, going from what we’ll call Prismatic Glitterbomb to Paul Bettany’s baby blues. “I am Vision,” White Vision proclaims, and he jets off through a skylight in true superhero fashion. Also totally on-brand for the Avenger: he doesn’t bother to ask if anyone would like some help cleaning up after his brain lasers made a mess. That’s the culture of exceptionalism for you.

The blurry Vision of the future

After the dust has settled, viewers are left wondering what happened to Hayward‘s secret weapon. It can be assumed that we’ll be seeing him again in the future, but in what form? Since a truly recuperated Vision would have gone straight to Wanda‘s side, it seems like a fair guess that the colorless version of him still isn’t running at his full capacity, not even in the time it takes Wanda to set up shop in a charming woodland cabin in the middle of nowhere. Where he could have gone, whether he’s back in S.W.O.R.D custody, and crucially, whether he’s aware of the events depicted in Endgame, remains to be seen.

By the point in the comics when the Vision had fully recovered his personality, Wanda had moved on to newer, more exciting personal breakdowns, as alluded to in the second WandaVision post-credits scene, which saw her focused more on magic and the desperate cries of her disappeared kids than on trying to reinstall her missing husband’s old operating system.

It’ll likely be some time before we get concrete answers as the Viz’s fate. In the meantime, all we can do is turn our voices as one to the minds behind the Marvel Cinematic Universe and say, “Please, please, don’t break our hearts again.”