The News Fetcher
Home Movies Ways In Which Star Wars: The Rise of Skywalker And Avengers: Endgame... 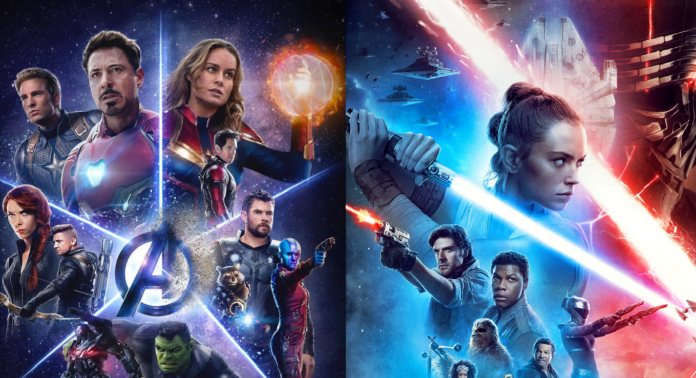 There has always been a tussle between the Star Wars Vs Avengers movies. In 2019, Disney released the epic finale of the most loved Infinity Saga. With years of storytelling under its bag, in addition to a great ensemble cast, Endgame ended an era. Furthermore, it opened up a whole new possibility of a shared universe. With it, the studio also delivered two of the year’s biggest hits.

In this universe of Star Wars Vs Avengers, we not only got Endgame but also the Star Wars Sequel, in The Rise of Skywalker. Not just that, both the films have been similar in the sense that they proved to be the turning points for their respective franchises. However, what one does not realise is that the two films are actually much more alike than we think. Below are a few ways in which these Star Wars Vs Avengers movies are, in fact, the very same movie.

Both The Films Showcase The Surprising Return Of A Dead Villain:

In both the Star Wars Vs Avengers films, the heroes face off against a hero they thought they had defeated. Endgame shockingly shows that Thanos is dead in the first 20 minutes. But the Mad Titan returns to the story through time travel by the time we are in the third act.

Similarly, in The Rise of Skywalker, we learn very early on that Emperor Palpatine is alive. How he survived is never truly explained in the movie. However, his survival clearly involves the dark side of the Force. Also, just like in Endgame, we do not get to see a fully-powered Palpatine until the final battle.

The Star Wars Vs Avengers Movies Both Have Intertwined Fates For Their Lead Heroes:

The Rise of Skywalker hinges a lot on the fates of Rey and Kylo Ren. Similarly, Endgame explores the stories of Tony Stark and Steve Rogers. All through the Marvel Cinematic Universe, the two characters have proven to be the overarching co-leads. Therefore, it made sense that their stories would ultimately meet an end in Endgame.

In the final movie, Iron Man sacrifices himself to defeat the Mad Titan Thanos, while Cap goes back in time to retire and settle down with Peggy Carter. Similarly, in the Star Wars Sequel Kylo Ren (who actually is Ben Solo by this point), gives up his life to revive Rey. She, in turn, pays a visit to Lars Homestead on Tatooine. Subsequently, she constructs her own lightsabre and assumes the Skywalker family name.

Both The Films Have A Surprise Rescue Transmission:

This is one of the really crazy connections between Endgame and The Rise of Skywalker. In both the films, the heroes are greatly outnumbered by the forces of the resurrected villains. Yet, just when Captain America and Poe Dameron, respectively, believe they’re making their last stand, the cavalry makes its entry.

In Endgame, Falcon delivers a satisfying call back as well. This subsequently prompts a sea of portals to reveal the returned heroes. Similarly, in The Rise of Skywalker, Lando Calrissian comes through with a last-minute save. He is also joined by numerous Resistance allies. Heard of that happening before? You decide.

The Movies Are Also Full Of Climactic One-Liners:

Every hero wants to get the last word in. however, no one wants it more than Tony Stark. And right before that fateful snap wipes away Thanos, Tony and his purple nemesis exchange a few last words. “I am inevitable,” Thanos says. But then, he is shocked to see the Infinity Stones are gone. And this is where Tony reveals he has them. In between gasps, he says those immortal words, “I… am… Iron Man.”

In what is nearly the same identical fashion, Palpatine proclaims victory over Rey in The Rise of Skywalker. Zapping away, he unleashes the full power of the dark side in a blast of lightning. “I am all the Sith!” he says in a triumphant manner. Rey, with the power of past Jedi on her side, then says, “And I… am all the Jedi!” while both scenes are working in their own context, they are still too similar for our taste.

Finally, We Have A Not-So-Definitive Ending In The Two Films:

Both the Star Wars Vs Avengers movies provide endings to their respective stories. However, even as the two films conclude the Infinity and Skywalker sagas, they set up a multitude of possibilities that might follow in the future.  After Endgame, we already know that Disney Plus will be continuing on with the stories of several key MCU heroes, like Thor and Loki.

In the case of Star Wars, there is some Disney Plus content as well. However, those shows are set a long time before The Rise of Skywalker. There is still no strong clue as to what will happen next, or if we will ever get more of the main characters from the sequel trilogy. Regardless, we can rest assured that it isn’t the last of Zorii Bliss and Jannah that we have seen. Moreover, in the case of Jannah, Lucasfilm already has a spinoff if they want it.