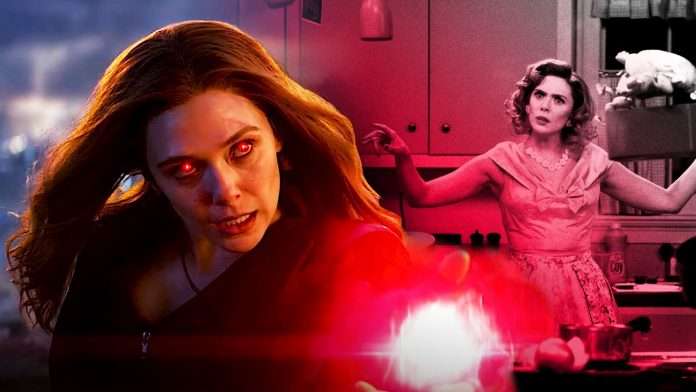 Of every upcoming entry in the Marvel Cinematic Universe, WandaVision appears to be the funkiest — and the most difficult to get a handle on. The brief looks we’ve gotten so far have teased a happy sitcom home life for Wanda Maximoff and her main android squeeze, their suburban bliss undercut somewhat by the fact that Vision died like, three movies ago.

The freak train that WandaVision seems to be riding is in keeping with the title characters’ overall oeuvre. Vision is a vibranium robot with a mystical space rock for a brain, and in Avengers: Age of Ultron, audiences were given the best Scarlet Witch primer available when Maria Hill summed up her nigh-on sixty-year comic book history with the words “she’s weird.”

That description is about as close as fans have gotten to an in-universe explanation of Wanda’s powers — we’ve seen her rock telekinesis and scramble people’s brains, but never really been given a good read on where her abilities came from beyond “Hydra something something Mind Stone.”

That all seems set to change soon, however, as Marvel Studios head Kevin Feige hinted in a recent interview with Empire magazine that WandaVision might finally crack the Scarlet Witch open and give us a look at what’s under the hood, superpower-wise.

WandaVision might finally tell us what’s up with Wanda

“So it seemed to explore that would be worthwhile post-Endgame. Who else is aware of that power? Where did it come from? Did the Mind Stone unlock it?”

Feige’s comments about the Mind Stone “unlocking” Wanda’s powers seem loaded. Wanda, who debuted in X-Men No. 4 back in 1964, started as a mutant and was eventually revealed to be the daughter of Magneto.

When she was introduced in the Marvel Cinematic Universe, mutant characters were still under license by 20th Century Fox, but Quicksilver and Scarlet Witch’s occasional tenures as members of the Avengers made their use in the MCU fair game, minus their mutant heritage — it was all pretty convoluted. But with Disney’s 2019 acquisition of the Fox Entertainment library of assets, Wanda may return to her mutant roots, paving the way for more X-gene shenanigans in the future.

WandaVision is scheduled to premiere on Disney+ on January 15, 2020.

Aamir Khan To Star In A Sports Drama

Troubling Details About The Falcon And The Winter Soldier