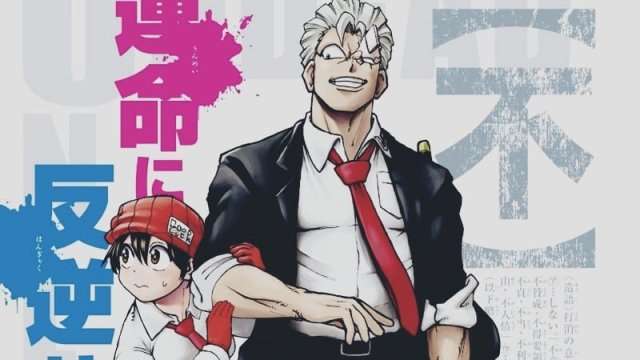 Ladies and gentlemen, we got a very fitting end to the ‘Spring Saga’, the last spread only made it more emotional. The very fact that we all knew how it’d end and still Undead Unluck was able to mesmerize us speaks a lot about it. Moreover, Fuuko also got a lot of character development along with Billy, Andy, and others. Not going to lie, all of this only makes it interesting as to what might happen in Undead Unluck Chapter 94.

Undead Unluck is a manga series written and illustrated by Yoshifumi Tozuka. It has been serializing in Shueisha’s Weekly Shōnen Jump magazine since January 2020. Furthermore, it has a total of nine tankobon volumes as of December 2021.

As an ‘Unlucky Girl’ prepares to face her death, an UNDEAD who desperately wants to die appears before her. And he is vicious, violent and buck naked. Because that’s how an unprecedented picaresque hero appears in Shonen Jump!

After throwing Fuuko in Spring’s core to have their last duel, Andy proposes everyone have some sake. Seeing how easygoing Andy is in the face of his extinction, Rip is in a state of denial. And funnily, everyone else agrees to have it because they either trust Fuuko or are embracing the present.

With his Crimson Crescent slash, Andy cuts a tree in several pieces so Isshin can make sake cups. Then he tells Latla to bring down the sake Spring was having on the rooftop. However, before they can chug down some good Japanese sake, Fuuko along with Spring decide to join too.

Seeing how happy everyone is in the face of death, Spring lies there in confusion blabbering about his mistakes. To stop the Uma from enjoying and ruining the mood, Andy makes him drink some too. And then finally, the final game of gamble begins when the party is in full swing.

Although Fuuko is hesitating to play the game as it’ll mean the death of Spring. But Andy comes in clutch and explains to her that she made Spring feel loved and that’s what matters. After witnessing the warmth of friendship he got in his last moments and remembering his old friend, he finally departs.

As the final Uma departs, the search for the treasure will once again create some tension between the two groups. Although it might not happen too as Billy got to see what Fuuko is capable of. With both of the groups teaming up, they have a good chance to defeat God.

Not to mention, God must be a bit furious about what happened with Spring despite him using his tricks. Undead Unluck Chapter 94 will most likely bring the groups a bit closer after their brawl with God and Spring.

Undead Unluck Chapter 94 is all set to release on January 16, 2022. The manga usually releases on a weekly basis, every Sunday.