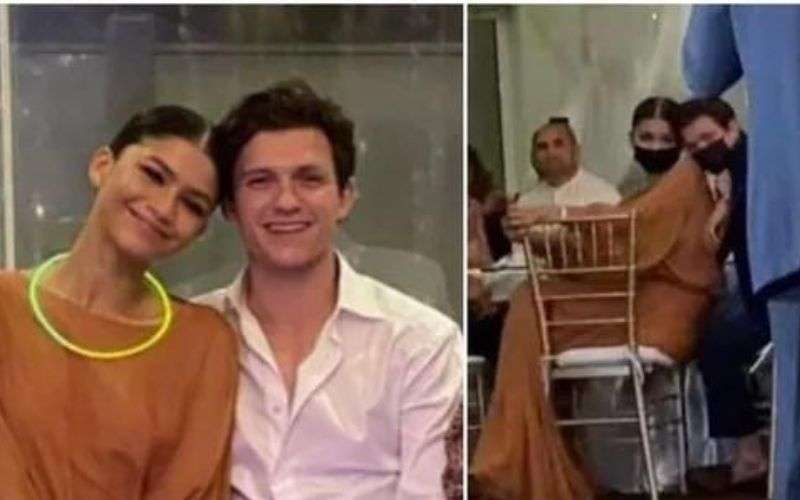 The new Tom and Zendaya wedding pictures from the one they attended are in our hands. The Spider-Man couple recently attended a wedding of their close friends and their cute PDA melted many fans’ hearts.

Recently, Spider-Man actors Tom Holland and Zendaya were spotted at their friends’ wedding party. While fans are excited to see the couple in their own wedding, we have to settle that this will have to do for now. The pictures were circulated online and many fan pages and accounts of the Tomdaya couple began posting it.

Both Holland and Zendaya have not shared any pictures of themselves from the ceremony or the after party. While they have not had any online interaction that Tomdaya fans crave for, the couple were spotted holding hands in the photos.

The pictures and videos of them at the wedding were mostly blurry and grainy. But the couple looked happy in each others’ company. Holland wore a white shirt with black pants while Zendaya styled a brown Valentino dress. They were spotted romantically holding hands during the newlywed couples’ first dance on stage.

Earlier this July, the two Spider-Man stars were confirmed to be dating after the dating rumour had followed them for years. Although they have always made fun of it and put it off as a joke, the duo was caught while they were kissing and making out in a car.

The picture threw fans off because they have been speculating their romance for years. Rumours about the two started as early as 2017 when a source told People magazine that Zendaya and Holland were romantically involved. However, Zendaya and Holland have always made sure to shut down the rumours and allegations back then.

Must Read: Tom And Zendaya Kissing Pictures Confirm Dating Rumours Between Them

There were many rumours that stated that Holland and Zendaya were together on a holiday, which Zendaya completely shut down again in 2017.“My favorite is when it says we go on vacations together HA! I haven’t been on a vacation in years! hbu @TomHolland1996???” the actor tweeted.