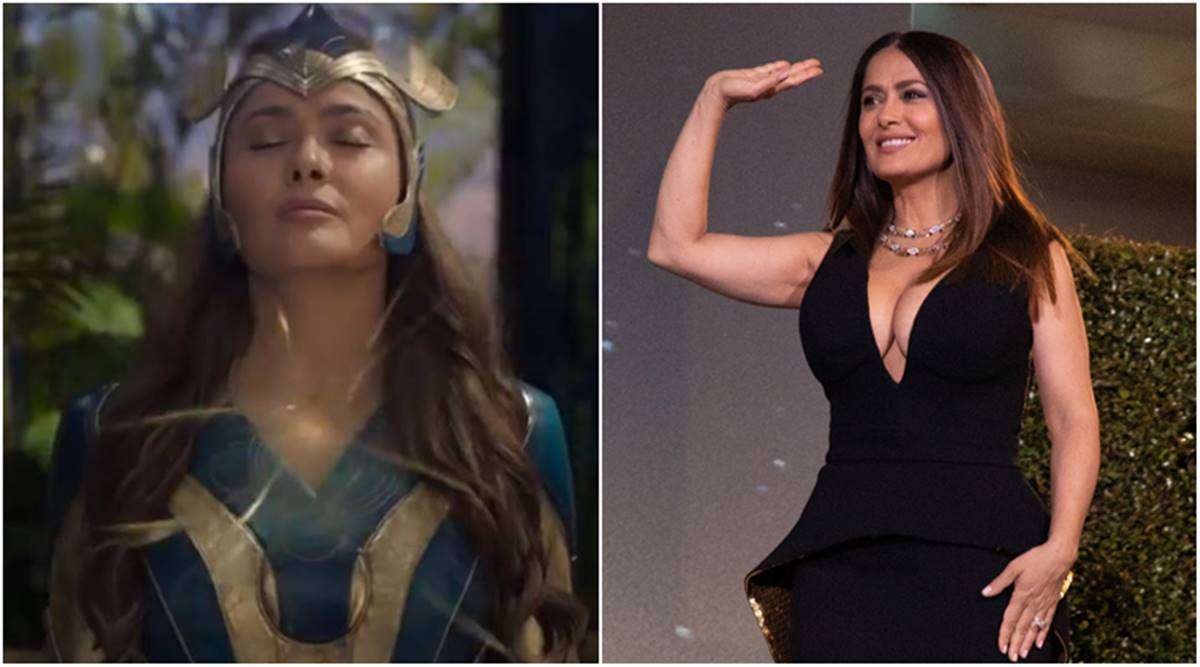 Eternals is a mere two weeks from hitting theaters, and anticipation is at a fever pitch. The upcoming MCU film has the tall task of telling a story that spans over 7000 years while introducing a cast of brand-new characters.

Now this Eternals team is largely unknown to the average Marvel fan, but the actors portraying these heroes are anything but. The Chloé Zhao-directed venture is headlined by names like Angelina Jolie, Kit Harrington, Richard Madden, and Salma Hayek.

Hayek takes on the role of Ajak, the maternal figure for the crew of intergalactic beings. She serves as the spiritual leader of the Eternals, offering guidance and falling into the role of the moral middle of the motley crew.

Now, almost everything has been put out in the open regarding the project (including some post-credit spoilers), but that was always the case. And according to Hayek, keeping the secret of her joining the MCU was not an easy task.

In a recent interview, Eternals star Salma Hayek, alongside Angelina Jolie, told a story of trying to lie to keep her Marvel secret from Ryan Reynolds and Samuel L. Jackson while working on The Hitman’s Wife’s Bodyguard.

The Ajak actress mentioned that, as Deadpool had just become part of the MCU at the time, she denied and Marvel involvement, but focused intently on the two actors going back and forth, “trying to listen, asking little questions and trying to learn” while not revealing that she had been cast in an upcoming Marvel movie.

She did her best to stay tight-lipped but was “dying to brag! [And] wanted them to know so badly.”

Read this: Eternals: What Made Salma Hayek Cry?

Then it came down to a moment where Hayek’s secret-keeping abilities came into question as Samuel L. Jackson had “picked up [her] nervousness” :

“And then one day I’m sitting with Sam right after they were talking about [the MCU]. And he goes ‘So, how much are they going to pay you?’… I go, ‘What are you talking about?’ He goes, ‘Come on. I’ve been watching you, and you’re in a Marvel movie, and you don’t want to say because they told you not to say it. It’s OK, I’m part of the family.’ It was incredible! He picked up my nervousness to brag.”

Secret, Secret, I got a Secret

Secrets in the MCU are nothing new. And one can see the complicated place Salma Hayek was put in with her co-stars in Reynold and Jackson. Here she was sitting alongside two superhero actors, not being able to tell them that she was going to be joining them under the Marvel banner.

It is cute though that Sammy J picked up in her uneasiness when the MCU came up and broke the ice the way he did. It has been known for a long time that the team of Marvel actors is a tight-knit brotherhood, and they are there for their canon cohorts when they need them.

If anything, both Samuel L. Jackson and Ryan Reynolds are valuable resources for someone just entering this world of comic book fodder. Reynolds is still waiting to make his MCU debut and Jackson is a vet with his own Secret Invasion series on the way. Surely the two of them are good to confide in and could help someone like Hayek in maneuvering their way through the metaphorical Marvel minefield.

It is stories like these that really humanize the actors. A lot of times, in fans’ eyes, these heroes can be built up to be greater than the average joe. With this little soliloquy, Hayek totally breaks down all those walls of celebrity that may have been built up in the audience’s mind. It’s also nice to see the actress excited to be a part of such a massive universe.