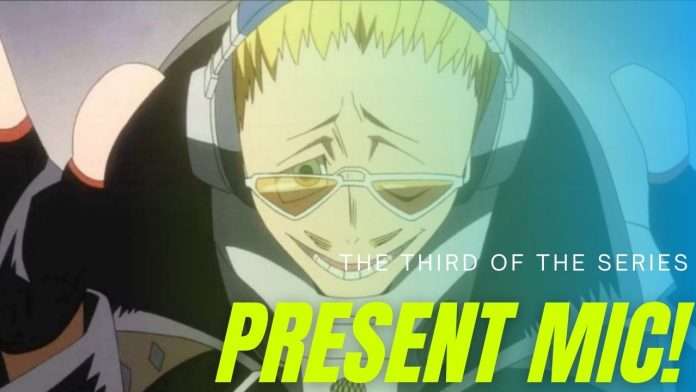 Present Mic is a pro hero in the My Hero Academia universe. His real name is Hizashi Yamada.

He is 31 years old and was born on 7th July, according to the manga.

Present Mic is an extrovert and loud hero. He takes on the persona of a radio host or announcer. 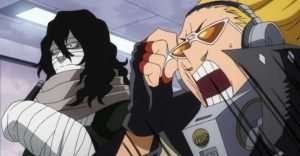 He is a jovial individual but also has a keen intellect. Hizashi is also one of the few people closest to Shouta Aizawa. He is also a former student of UA High.

Hizashi is the English teacher of UA High. His quirk is called Voice which allows him to increase the volume of his voice, giving him an ability that is similar to a sonic scream.

The sound from Hizashi’s Quirk is strong enough to cause people’s ears to bleed from far away. The only disadvantage is that it does not work underground.

He has entomophobia and has a radio show called ‘Put Your Hands Up Radio’, where he broadcasts nonstop music.

Present Mic’s real name is also a reference to Yamada Hisashi the host of “Hisashi Yamada’s Radi-Unlimited” in TOKYO FM.

To amplify the power of his quirk, he uses a device around his neck called the Directional Speaker System.

His costume consists of a black jacket with very tall upturned collars. He wears studs, matching black pants, and black boots. He always wears a pair of headphones with the words HAGE written on them.

The word HAGE is a reference to his original design. He was supposed to be a bald, old and fat man who would only do announcements but the author found this concept boring.