Peach Boy Riverside is a manga series that has been widely serialized on Shōnen Magazine R and Magazine Pocket. Since its inception in January 2008, it has made shockwaves across the weeb community for its engaging and breathtaking tale. It’s the story of a princess who dares to challenge life on her own terms.

That’s why we’ve done our research meticulously and brought you all the relevant information about Peach Boy Riverside Episode 3 you need to know.

Peach Boy Riverside is a dark fantasy adventure anime that follows the adventures of a former princess, Saltorine Aldike or Sally (aka Sari). Being a princess of the Aldarake Kingdom, she’s been sheltered from everything all her life.

One fateful day, she meets Mikoto Kibitsu who destroys all the Oni attacking her kingdom. This encounter makes her learn about the vast world out there full of excitement and prospects. She leaves behind her sheltered existence and embarks on a journey of self-actualization.

In the 2nd episode, Sally rescues Frau from being murdered and cuts off the Oni’s arm. The Oni attacks her with a punch, which she blocks with ease. He unsuccessfully tries to use an Oni Blast, which ends up not hurting both Frau and Sally, fortunately. Determined to bring the fight to an end, Sally slashes his upper body with her sword and ends his life.

While the other Oni Meki is going on a tour, she comes face-to-face with a man whom she recognizes as Mikoto Kibitsu. She finds out that Mikoto has been murdering tons of Oni with ease due to how strong he is. Mikoto too recognises that she’s a villain who was responsible for the attack but he waits for her to regrow in size and power.

Even after she grows, her Oni Blast is easily deflected by Mikoto, who defeats her but lets her live. He turns her into a human by cutting off her horn and gouging out her eyes (the source of her power)

Later, the villagers’ reactions to Frau totally change and they’re hailed as heroes and saviors. She leaves the fort along with Frau and Meki after learning that Mikoto was there a short while back.

The title of Peach Boy Riverside Episode 3 is called “Sally and a Crossroads”. It will be released on the 15th of July 2021. It’ll be out on Tokyo MX, AT-X, and BS NTV.

Peach Boy Riverside might explore the new adventure they embark on as Sally and Frau got a new friend, Meki! Mikoto Kibitsu might find out the Identity of the one who destroyed the fortress. There have been no spoilers released but as and when it does, we’ll update it here!

Fans from Japan can watch it on Netflix. But for fans outside Japan, we’ll all have to rely on Crunchyroll, where Japanese audio with subtitles in Portuguese, Spanish, English, and Italian subtitles can be watched the very day it gets aired in Japan. 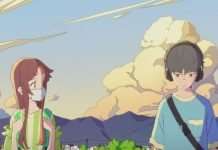 Here’s The Haiku Cherry Wrote For Smile In Their First Encounter: Words Bubble Up Like Soda Pop