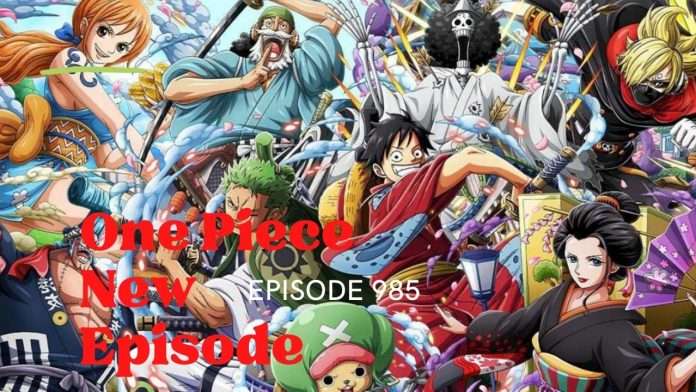 Here are the leaks for One Piece Episode 985. The episode is titled “Thinking of O-Tama – Luffy’s Furious Strike”. It will air on 1st August.

In the previous episode, thanks to the disguises given, the Beasts Pirates are still unaware of the attack. Franky brings out his Battle Franky’s. He decides to ride Kurosai FR-U IV while giving Brachio Tank V to Chopper to command.

Zoro and Luffy separate from the group and runs off on their own. From afar though, Yamato is watching the group. 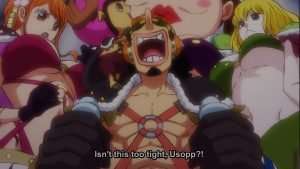 Inside Kaido’s castle, the Tobiroppo meet with Kaido. He apologizes for keeping them all waiting before confessing he never summoned them at all. King steps forward and says he is the one who did. He wants to become an All-Star.

Kaido then tells the Tobiroppo that their job is to find his idiot son Yamato who disappeared today. If they do they will get a chance to fight an All-Star.

Luffy continues to look for Kid. He gets drenched in Bean Soup. Turns out the pirates made too much and were unable to eat further. They decide to throw it down the street for beggars.

Luffy gets angry and starts a fight. Zoro who is drinking in the Live Floor with some beast pirates also gets angry after listening to comments about the poor. A fight breaks out where Zoro uses Haoshoku Haki.

One Piece Episode 985 will cover:

If you are interested in One Piece characters and their popularity among the audience check out this article for the results of the poll.