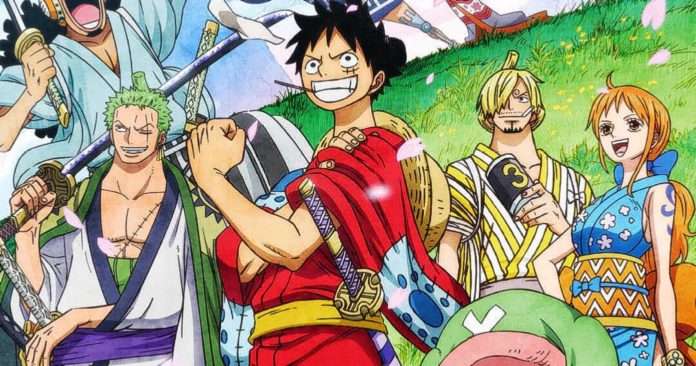 Here are the leaks for One Piece Episode 983. The show is in the 20th season. The current arc is called the Wano Country arc.

In One Piece Episode 982, Kin’emon and the Scabbards discuss how to enter Onigashima’s torii gate. The Beast Pirates are guarding the gate and Kin’emon sees that ship is missing. Suddenly, a big explosion occurs and Luffy jumps from the smoke. He crushes some guards and the rest of the crew follow up.

After the brief battle, they decide to have a toast to celebrate Jinbei’s arrival. On Onigashima, celebrations occur as Orochi plays a game with some women. The Golden Kagura festivities begin and the introduction for the new groups begins.

The Numbers, Mimawarigumi and Orochi Oniwabanshu are introduced. The Tobiroppo is however missing. In a screened room, the members of the Tobiroppo gather as they wait for Kaido.

In the torii gate, Luffy tells Kin’emon that the gate is clear. The Straw Hats pour mugs of Sake to celebrate Jinbei’s return. However, they stop the celebration when the Scabbards sail forward to Onigashima.

The Scabbards comment that the Straw Hats are very dependable. Kin’emon turns to address the Kozuki’s samurai and orders them to charge. They all scream and press onward, and the scene flashes to Oden marching forward, representing the continuation of his will.

Luffy Slams his mug down and decides to celebrate only after defeating Kaido, Orochi, and Big Mom. The rest of the crew also agree and they set off behind the samurais.

One Piece Episode 983 will cover: