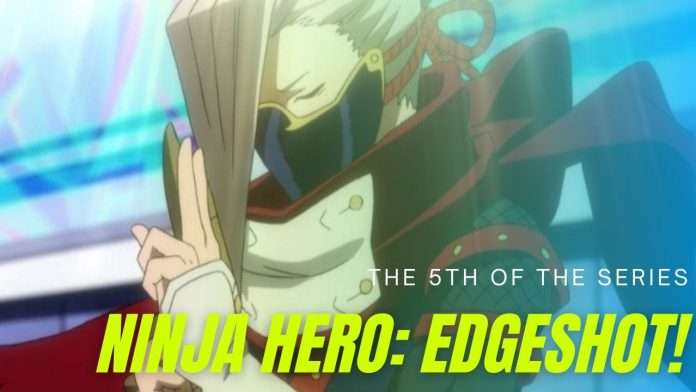 Ninja Hero: Edgeshot is a pro hero in the My Hero Academia Universe. His real name is Shinya Kamihara.

He is the current number 5 Pro Hero. He is 34 years old and is the leader of the Lurkers. According, to the manga his birthday is February 22.

Ninja Hero: Edgeshot is a hero that represents a traditional Japanese shinobi.  He is calm, collected, and focused. He is also intelligent and level-headed.

Shinya’s quirk is called Foldabody which allows him to make his body and limbs extremely thin and long. This allows him to transform into a razor-sharp string. He can also transform faster than the speed of sound.

Edgeshot fully mastered his quirk as a result, he is a very powerful hero. He flattens his body to pass through tight spaces. His main attacks are transforming into shapes to pierce his opponent. 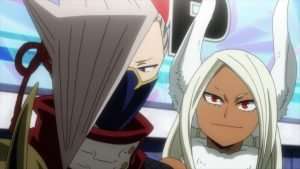 He transforms his body into a sharp blade and pierces his opponents before they can react. By cutting off the blood flow to their brain, Edgeshot can knock someone unconscious almost instantly.

Edgeshot is also capable of fighting in mid-air by folding his body into a drill-like shape and maneuvering around his target.

Edgeshot’s costume design resembles that of a Shinobi. He wears a mask on his lower face and has a golden mask on his right shoulder. His signature item is his red scarf.

He was also the first to deduce the warping quirk of All for One, in All Might’s second encounter with the villain.

His name in Japanese contains the words stretch, expand, paper, meadow, and to be.