Navneet Kaur fake certificate: The 35-year-old independent Member of Parliament from Amaravati, was fined by the Bombay High Court for producing caste certificates that are fake.

The Nagpur bench of the High Court announced the order of cancellation of Kaur’s caste papers on June 8. It was based on the complaint filed by Shiv Sena leader Anandrao Adsul.

#TrendingTonight | "I have been fighting against injustice and will continue to do so in the future": Navneet Kaur Rana, Independent MP, Amravati, after the Bombay High Court cancelled her Caste Certificate. pic.twitter.com/GtNFkVvzcx

MP Navneet Kaur has been granted over a month’s time to prove the validity of her certificates in court. If she fails to do so, she could reportedly lose her parliamentary seat permanently.

The court has also fined the MP two lakh rupees. Kaur will have to pay it to Maharashtra Legal Services Authority within a fortnight according to reports.

“I respect the court’s order as a citizen of this country. I will approach the Supreme Court, I am confident that I will get justice,” Kaur said in response to the allegations

Kaur is in legal trouble over the complaint filed by Anandrao Adsul. Adsul is a Shiv Sena MP who was defeated in the 2019 Lok Sabha elections by Kaur.

Even prior to 2019, Kaur’s caste certificate was challenged in court. A 2016 report from The Hindu notes a petition by Raju Mankar, who claimed that Kaur falsely occupied the Scheduled Caste seat in parliament.

She is Punjabi Gen but got elected from Amaravati SC seat.

Many such peaceful also are getting elected from SC seats with fake certificate.

Mankar’s petition stated that Kaur is originally from Punjab. “As per information received by the petitioners, she belongs to Labana caste which is not recognised as Scheduled Caste in the State of Maharashtra,” the petition said.

Kaur and the Shiv Sena have frequently also been against each other. Earlier this year in March, Kaur had alleged that Sena leader Arvind Sawant threatened her with acid attacks for speaking against the Maharashtra government.

However, Sawant had denied all of the allegations. This previous incident caused a lot of uproar in the house of Parliament. 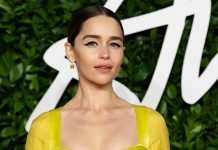 Why Is Emilia Clarke Scared Of MCU?

What is The Starting Song About In The Loki Episode 2?