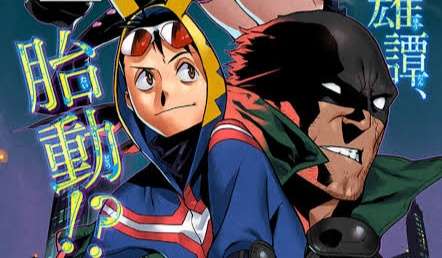 Chapter 114 largely featured plenty of action as Koichi and Number 6 fought it out in mid air. The chapter ended on a major cliffhanger with Number 6 mustering all his strength to destroy Koichi with a huge explosion. Will Koichi survive? Below you’ll find everything you need to know about My Hero Academia Vigilantes Chapter 115.

My Hero Academia Vigilantes Chapter 115 is scheduled to release on Friday, December 10th, 2021.

Chapter 114 closely follows the fight between Koichi and Number 6. Number 6 in his lightning mode fires missiles at Koichi who decides to get a little bit of distance and height to strike back at the missile. The strike goes off and the light shines over the entire sky and we get to see the other characters all looking up at the sky and witness what’s happening with Koichi.

We also get to see a scene with some news reporters in a helicopter who are recording all that is happening. Koichi then thinks that because of this, people all over will have witnessed this incident and pretty soon, other heroes will arrive at the scene. This means that Koichi just has to keep running and everything will work out fine.

Number 6 goes in to attack Koichi with everything he’s got as he fires missiles at Koichi but they land behind him and explode. With the fire from the explosion behind him and 6’s punches in front, Koichi is trapped. He realizes there’s no way to escape so he does his best to defend instead. And as he does so, Number 6 suddenly turns into a skeleton and his body starts falling downwards to the ground.

Koichi wonders if he’s dead. But then he sees the bomber villians down on the ground and we realize that Number 6 had used up all his strength and his last embers to summon the anon soldiers so that his body will crash into all the bomber cells and detonate. This is Number 6’s master plan to kill off Koichi and All For One menacingly watches over the scene as he understands what 6 set out to do.

What Can We Expect From My Hero Academia Vigilantes Chapter 115?

There are no official spoilers available yet. They may be released one or two days before the chapter is out. Chapter 115 will give us some conclusion as to whether Number 6 is dead or not and whether Koichi will survive the explosion. Also, will the other heroes make it in time?

Where to Read My Hero Academia Vigilantes Chapter 115 Online?

You can read the upcoming chapter and the rest of the series on Viz legally.