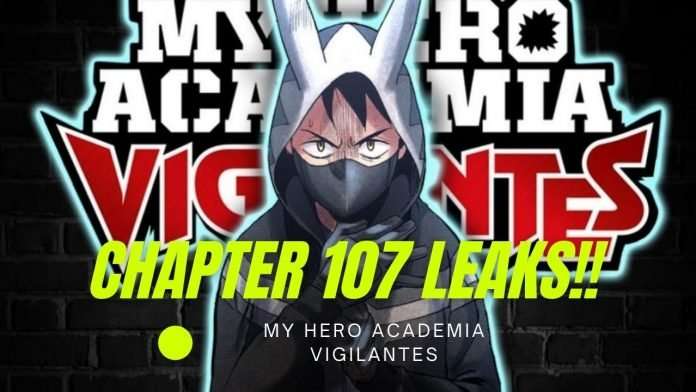 Here are the leaks for My Hero Academia: Vigilantes Chapter 107. The chapter is releasing on August 14th.

In the previous chapter, Rapt throws a rock at a nearby Anonymous, determining they are in fact still frozen. Soga arrives on his motorcycle asking for an update, as they inform him about Koichi and Number 6’s scuffle. Soga prepares to head after them.

Number 6 gives chase to Koichi as the two speed off down the road. He once again tries to hit him with an explosive punch, but Koichi instantly dodges to the side. 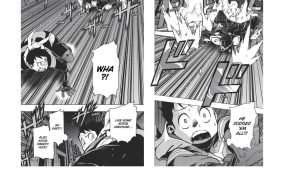 “O’Clock” figures out that Koichi’s been reading his patterns. He suggests to catch him off guard, he’ll have to alter his approach to eliminate his hangtime.

Koichi notices Number 6 speeding toward him, crawling on all fours, thinking about how creepy he looks now, forcing him to jump into the air and use his Shooty-Go-Blam-Blam-Blam-Blam. Number 6 can dodge them all, taking advantage of Koichi in mid-air this time, about to detonate him in the back.

However, Koichi manages to block the detonation punch with a repulsion blast from his back. Number 6 realizes that his Slide And Glide can project his force fields anywhere on his body as the two land and recover.