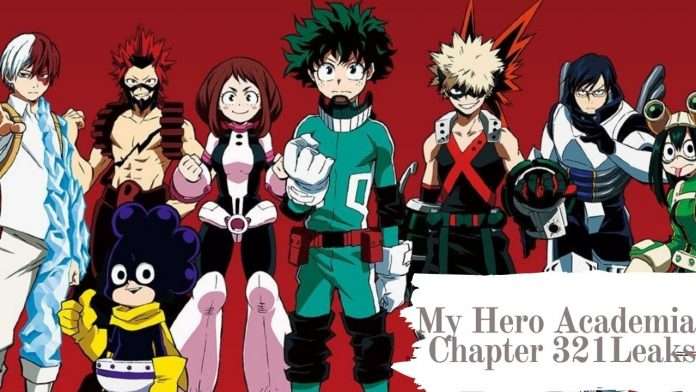 Here are the leaks for My Hero Academia Chapter 321. The manga chapter is releasing on 1st August 2021.

In My Hero Academia Chapter 320, the class catches up with Deku. Dynamight mocks him for changing his appearance. He also comments on Deku’s acquisition of the 4th and 6th users’ quirks.

Deku thanks everyone for coming and uses Smokescreen to escape. Dynamight blasts away the smoke. Anima uses his quirks to command birds to stop Deku. Deku tries to use Blackwhip to escape. Cellophane uses quirk to latch on to Blackwhip. 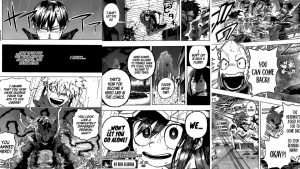 Earphone Jack also uses her new move which causes Deku to jump away from the wall. Tailman arrives and grabs Deku with his tail move. Deku insists that he’ll put everyone in danger.

Tsukuyomi uses Dark Shadow and knocks Deku against a building. Sugarman rescues Tailman and Earphone Jack. While still being attached to Dark Shadow, Creati creates a machine to put him to sleep.

She also explains that they have permission to use their quirks to assist Pro Heroes. She also shares their intention to join him and ensure his safety. Chargebolt holds on to him while Tentacole and Tsukuyomi cover them both. Chargebolt sends his electrification through the chamber.

However, Deku still survives and breaks away. He smacks right into a Heaven Piercing Wall made by Shoto Todoroki. As Shoto looks at Deku’s broken face he tells him to let him share his burden. Froppy also appears and sends her words of encouragement.

My Hero Academia Chapter 321 will cover:

Check out this article for more things related to the My Hero Academia Season 5 anime. Also, check out Boruto.