After yet again another emotionally charged episode, it is really no exaggeration to say Mushoku Tensei keeps outdoing itself. The storytelling and animation just keeps getting better and better. Rather than rushing the story, it’s nice to get episodes like this that goes into these details and make us care for the characters.

Episode 7 placed focus on Roxy’s childhood and her reunion with her parents while Rudeus and gang heads to Central Continent. Curious about Mushoku Tensei Season 2 Episode 8? Read on to find out!

In Episode 7, we see Rudeus, Eris and Ruijerd heading out together on their journey. They meet a man who introduces himself as North God Kalman’s direct disciple “Peacock Sword” Auber’s third disciple Rodrigues. He challenges Ruijerd to a duel saying he’d like a match with him since he seems to be a celebrated fighter.

Ruijerd accepts saying it’s been a while since he got a match offer and he completely defeats the other man who gladly accepts his loss and vows to duel again with Ruijerd. In the next scenes the gang are in the middle of their journey on a ship and both Rudeus and Eris are feeling nauseous.

They’re making their way to Central Continent. Rudeus makes conversation with Ruijerd and Ruijerd is surprised at the relationship between Rudeus and his father. This detail was nicely done considering the fact that Ruijerd lost his son.

Meanwhile, we get a heartwarming reunion between Roxy and her parents. Roxy comes home to her village and after she meets her parents for a short while, she suddenly decides to leave. But her mother starts getting emotional and we are shown a flashback scene of Roxy’s childhood. 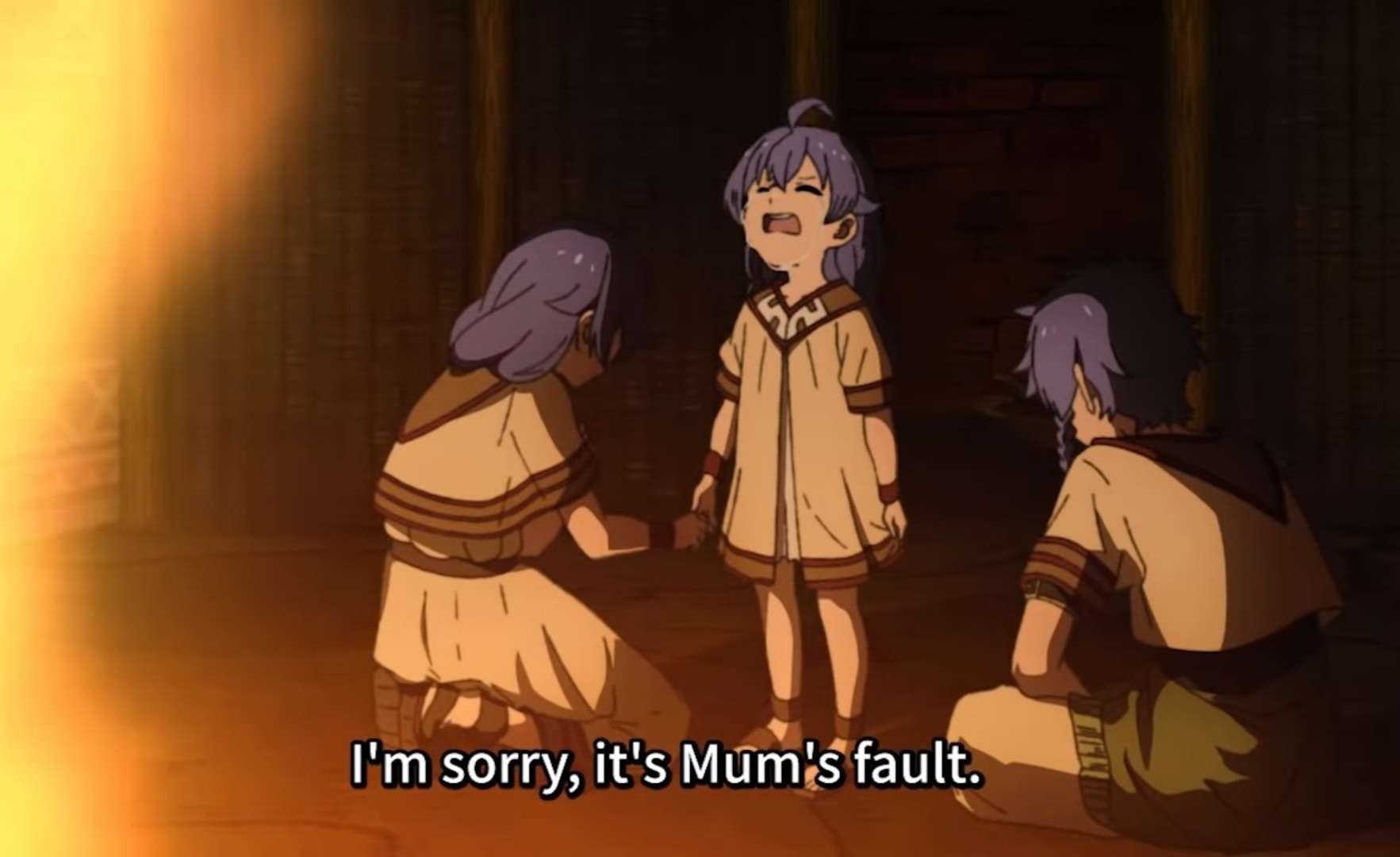 She was the only one who could not speak through her mind and felt alienated from the other villagers who could all use telepathy. She felt like she was holding her parents back and so Roxy had left the village. But we realize that her parents tried their best from their end, speaking a language that doesn’t come naturally to them for the sake of their daughter. Roxy also realizes this now and that it was wrong of her to assume she was a burden to her parents.

Back to the present, the family hugs each other warmly and cries their feelings out as Roxy apologizes to both her mother and father for having left home so suddenly back then. This scene was beautifully executed and shows Roxy as someone who is loved and cherished by her parents despite the difficulty they all must have endured in being unable to connect and communicate naturally with their loved ones. 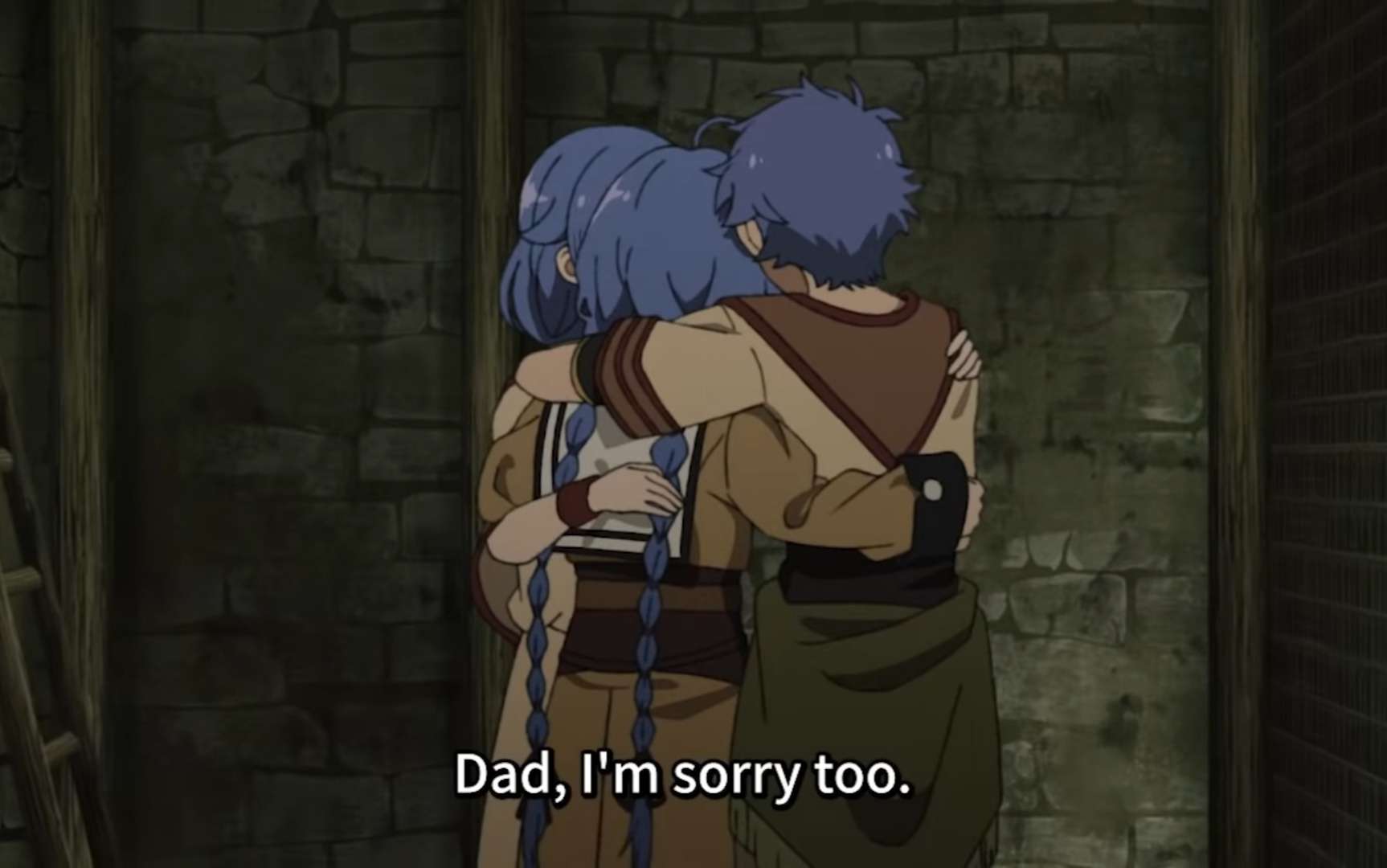 Roxy also learns from her parents that they’d met Rudeus and his party, Eris and Ruijerd two years ago. She realizes that Rudeus and his gang are the ones people refer to as Dead End and even though news of him travelling with a Superd gives her a slight pause, she remains confident in Rudeus.

At the end of the episode, Roxy is shown heading to Demon Continent and when asked if she doesn’t want to meet her disciple, she replies that it’s okay because now she knows he’s fine and she’s sure they’ll meet again someday. Given how things are proceeding, it may be a long time before she meets up again with Rudeus. 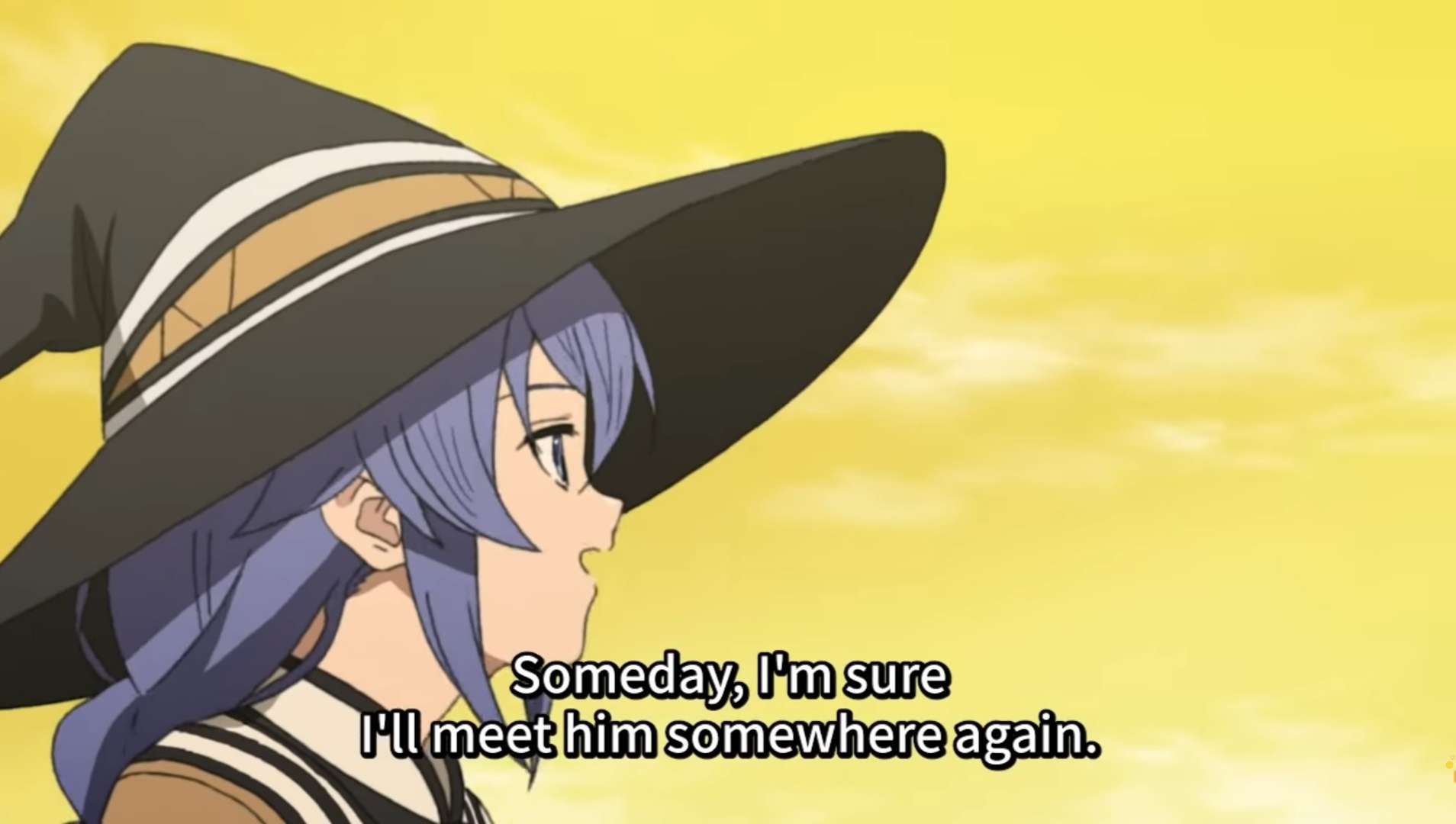 What Can We Expect From Mushoku Tensei Season 2 Episode 8?

The official preview is not out yet. But we can speculate that in Episode 8, we will see how Rudeus, Ruijerd and Eris arrives and fares at their next destination. The title of this upcoming episode is ‘Route Selection’.

You can watch Mushoku Tensei Season 2 Episode 7 and the other episodes of the series on sites such as Funimation, Wakanim and Hulu. Fans residing in Southeast Asia can stream the series on iQIYI, Bilibili and Muse Asia’s YouTube channel.