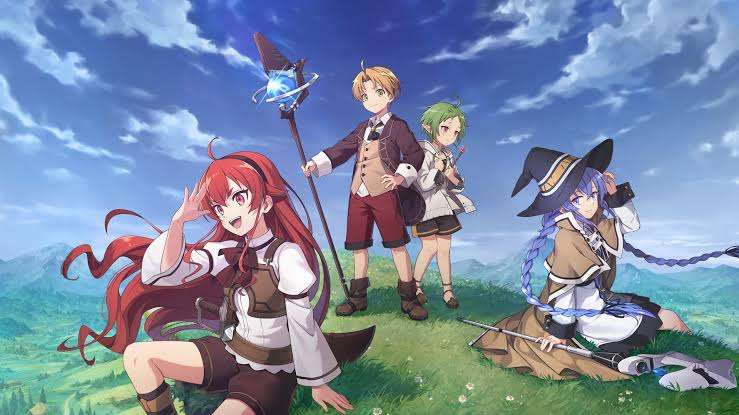 Ruijerd parts ways with Rudeus and Eris and all three of them get emotional as they say farewell. But this isn’t the only tear-jerking moment in the episode. What Rudeus thinks of as a sweet union soon turns out to be Eris expressing her own goodbye to Rudeus, at least temporarily, as she heads out on a journey of her own with Ghislaine.

After such a heavy episode, we wonder what’s in store next. To find out about Mushoku Tensei Season 2 Episode 12, read on.

The episode begins with Rudeus having a nightmare of sorts where he feels someone piercing their entire hand through his chest and then he sees Dragon God. He wakes up to find himself in the same cave they took shelter in, in the previous episode. Eris is sound asleep next to him, but Ruijerd is awake and asks if he’s alright.

Ruijerd asks him about Human God and expresses that he still can’t believe the entanglement with the Ancient Seven Gods. Rudeus then relays information to him about the Superd race being under a curse and that Laplace transferred his curse to the spears.

Rudeus also tells him how the curse is disappearing and becoming less effective as time passes and because Ruijerd shaved his head. Ruijerd gets emotional when Rudeus says that Human God told him that the curse can be fully broken if Ruijerd makes enough effort.

The next scene cuts to Rudeus and party arriving at his hometown and Rudeus reminisces all the memories he has of this place. This is where Ruijerd parts ways with Rudeus and Eris.

The entire scene is executed so well and is super heartwarming as Ruijerd thanks Rudeus for everything he’s been able to learn from him. He also tells Eris she is strong and capable, with the most recent proof that she fought Dragon God and survived the encounter.

After this, Rudeus and Eris make their way to Asura kingdom where they’re reunited with Ghislaine and Alphonse. Alphonse relays news of the deaths of Sauros, Philip and Hilda. And he also says that Pilemon Notos Greyrat wants Eris as his concubine.

Ghislaine absolutely objects to this, but Alphonse thinks Eris should go for it for the sake of the residents if there is no other choice. As an argument erupts between the two, Eris then asks to be left alone.

Later that night, Eris approaches Rudeus as he’s getting ready to sleep and the two end up spending the night together. When Rudeus wakes up the next morning all elated and even thinking of Eris as his girlfriend, he finds that Eris is not present.

He finds her letter which says they’re not suited for each other now and that she’s leaving on a journey. Alphonse relays the same message to him saying she left with Ghislaine, and that they asked Alphonse to not reveal their destination to Rudeus. The episode then ends with a shocked and devastated Rudeus in tears.

What Can We Expect from Mushoku Tensei Season 2 Episode 12?

There are no spoilers available at the time of writing. The title of the upcoming episode is “Wake Up, and One Step Forward”.

Advertisement There has been no character on Attack on Titan who has received as much hate as Gabi Braun. Gabi Braun is the little Marleyan Warrior from Liberio Interment Zone who is rumoured to get the powers of the Armour Titan. She is also the cousin sister of Reiner Braun, who along with Annie Leonhart…