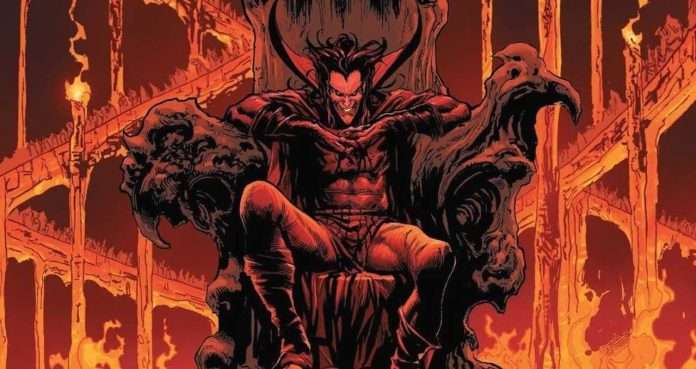 If you think Loki is the only Mischievous Scamp there, then you have not met the Real Prince of Deceivers, Spirit of Universal Lies The Mephisto. If Marvel takes his role seriously, he would be the next fan-favorite character in the MCU, just like Loki.

In the comics, Mephisto is pretty much the Marvel version of the Devil. He’s one of the biggest “Big Bads” there is. He’s made of the same nebulous cosmic energy as the Infinity Stones and, once he’s able to acquire the Time Stone, which allows him to travel through time and the multiverse, creating alternate versions of himself so that, even if he’s killed or destroyed, an alternate self can fill the void.

Hold on, wait a minute, don’t jump to the conclusion. I didn’t say he will show up in Doctor Strange In The Multiverse Of Madness yet. Let’s see if he can.

Well, it’s still unclear if Marvel Studios is even using the character in the MCU. There’s no telling if anyone has been cast as Mephisto yet. But that hasn’t stopped fans from speculating as though someone has. According to fans, Marvel is hinting that he does exist somewhere in the corner lurking in the shadows from the beginning of this year, starting from WandaVision. Still, later we got to know Jac Schaeffer ( Director of the show ) had no clue who Mephisto was until the virtual press tour for WandaVision began. The executive producer said Mephisto was never part of the conversation while creating WandaVision, as they were clear that the big evil in the show is grief. And alongside it, Agatha Harkness was the physical antagonist to Wanda.

The same thing happened with the Loki series:

In the first episode of Loki, Mobius, a mid-level employee of the TVA, investigate a “Nexus event” in France, circa 1549. Mobius makes contact with a child, who, despite living in the 16th century, has eaten a candy named ‘Kablooie.’ When Mobius asks the child who gave these, the child points to a stained glass window of a sinister deity with horns. Mobius comforts the child, telling her, “Don’t worry, that Devil’s afraid of us.” but later we saw there was no clue of Mephisto in the entire show, but now Rumours says he will appear in the upcoming Doctor Strange 2. Still, nothing is confirmed yet until the time prevails everything.

Mephisto is an extra-dimensional demon who rules a fiery pocket dimension that he calls “Hell” or “Hades.” However, neither the Hell of the Christian religion nor the Hades ruled by Pluto, the Olympian god of the dead. Instead, Mephisto calls his extra-dimensional realm “hell” in order to exploit Earth human beings’ belief in a single being of absolute evil, which is often referred to as Satan, who rules such a realm. Thus, Mephisto resembles the traditional visual conception of the devil.

He has white eyes, red skin, and wears red clothing, and essentially uses his similarities to the Christian Devil to terrify unaware human beings on Earth further. He’s had notable relationships and rivalries with several heroes over the years, including the Silver Surfer, Ghost Rider, Doctor Doom, Doctor Strange, Spider-Man, and, yes, Scarlet Witch, as well as many others.

As I said, he is one of the most interesting and necessary characters, as Mephisto often makes the kind of Faustian deals you’d expect from a being like him, in which he gives superheroes something they want while also taking something vital away from them.

Mephisto has had many dealings with Doctor Strange over the years in the comics, also note that in the One Day More comic book storyline, Mephisto made a powerful deal with none other than Peter Parker. The deal saved Aunt May’s life and erased Peter’s marriage to Mary Jane from existence, along with the public’s knowledge of his secret identity.

Given how Spider-Man: Far From Home ended with Peter’s identity as Spider-Man exposed to the world, it’s not out of the realm of possibility to think Peter might make a similar deal with Mephisto to restore his secret in this year’s Spider-Man: No Way Home.

Once The Devil Said:

I am the architect of your ultimate fall. I am the null. The void. The Hell that hungers… and I’m going to tell you a secret… I’m going to tell you a secret about your life… about why you’ll never find true happiness… because you will always be missing something. Incomplete. Unfinished. And ultimately, no matter how hard you fight, which cause you choose, the battle will always end with your facing… emptiness. ~Mephisto.