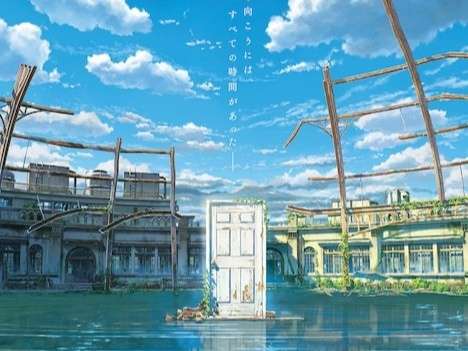 Fans of the critically acclaimed filmmaker Makoto Shinkai, most known for “Your Name” and “Weathering with You”, can rejoice as there are reportedly some latest details about the director’s new upcoming movie.

The source of this news comes from the Japanese movie studio Toho when the studio streamed a press conference through their YouTube channel, revealing Shinkai’s next movie, which will be his first in three years. .

The Japanese name for this new project is Suzume no Tojimari. Translated to English, the title would be: “Suzume’s Door Locking”, or “Suzume’s Door is Locked”, or even “Suzume’s Closed Door”.

Shinkai revealed the first official poster of the movie at a press conference at Imperial Hotel, Tokyo on December 15, 2021.

The same conference was also streamed on studio Toho’s YouTube channel. He elaborated on the plot and also spoke about the symbolism of the movie.

Read this: Tokyo Revengers Season 2 In Production, Release Date To Be Announced Soon

The story centers around a seventeen year old girl called Suzume, who lives in a quiet town in Kyushu. She then meets a young man who is in search of a door. After the duo successfully locate the first door among some modern ruins on a mountain, even more doors begin popping up, through which disasters arrive.

Suzume then embarks on a personal journey that ultimately leads to her growth as she travels around with the goal to close all these doors. Shinkai remarked that the closing of doors symbolizes Suzume tying up old loose ends and embracing her new liberation and the future.

Shinkai began his animation career working in the video game industry. This was back in 1996. He then went on to create his first feature film in 2004 titled “The Place Promised in Our Early Days”.

A lot of his films follow a pattern in being both commercially successful along with being well appreciated by critics, especially his most recent creations, “Your Name” and “Weathering with You”, with “Your Name” even becoming one of the highest-grossing anime films of all time as it grossed more than ¥41.44 billion (US$380.15 million) worldwide. It also received recognition from several prominent awards institutions, winning Best Animated Feature Film at the 49th Sitges Film Festival, the 71st Mainichi Film Awards, and the 2016 Los Angeles Film Critics Association Awards.