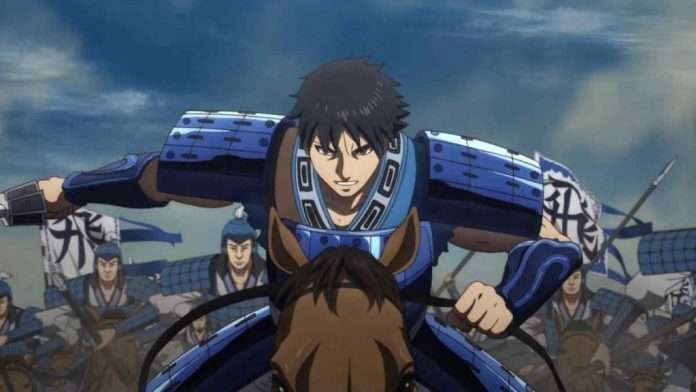 The official website of the Kingdom Anime revealed on Monday that it is expected to start broadcasting the third season in April 2021. It also released a new video and visual preview for the return of the new season.

The production committee reported on 26 April earlier that this year the airing of episode 5 and later parts of the third season had been postponed. The committee clarified that enough time had been allocated to production, but the Japanese government’s State of Emergency Declaration against the New Coronavirus Disease (COVID-19) had a major effect on the production schedule. The anime was later rescheduled to return in the spring of 2021.

The third season of the anime of Yasuhisa Hara‘s Kingdom Manga premiered on NHK General on April 5 at 24:15 (effectively, April 6 at 12:15 a.m.). Funimation is distributing the show as it is aired in Japan.

This seinen manga is about the protagonist Xin, who is a war orphan with a dream of becoming the greatest general—and unifying China for the first time in 500 years by doing so. It is a fictional adaptation of the era of Chinese history known as the Warring States period, which ended in 221 BC when Ying Zheng, King of Qin, succeeded in defeating the other states and uniting China. The young Qin king looks identical to Xin’s childhood friend and servant Piao, who was killed because he acted as a body double for the other in a struggle for the throne. Xin seizes this opportunity to work with and help Ying Zheng become the king, while also starting his military life as a Qin soldier.

The original manga has been serialised in Shueisha’s Weekly Shōnen Jump magazine, and has 59 volumes as of September 2020. Author Hara plans to complete at least a 100 volumes for the series.

The anime adaptation started airing in 2012, with the second season releasing in 2013.