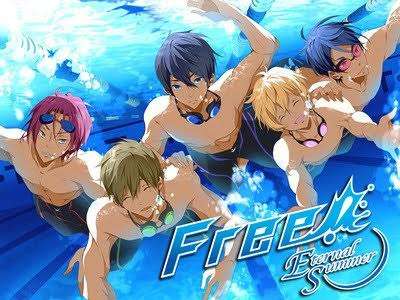 On April 22, 2022, the second installment of the Free! The Final Stroke film duology will premiere. To keep you excited and hype about the release of the upcoming movie before the movie opens, the series has released exciting new teasers and images.

With this visually attractive teaser, Kyoto Animation has once again shown its worth. We get some great pictures of Haruka in it, despite the fact that it doesn’t reveal anything about the narrative.

Read this: Everything You Need to Know About the Upcoming Sports Anime Re-Main!

Haruka and Rin’s famous journey may be coming to an end soon. Hopefully, ths match will be the final bang that leaves us crying and satisfied at the same time. Fans including I will find it very hard to come to terms with the fact that this will be the last time gawking at their chiseled bodies.

After all, Haruka has a big game coming up. A new visual for the sequel has also been released. The final showdown between Rin and Haruka has been hinted at in the visual, and it’s something to look forward to.

Haruka looks nervous in the short clip and fans have expressed their concern that this might affect his performance in the game.

Haruka Nanase, a skilled swimmer in high school, is at the core of the plot. He and his buddies revive Iwatobi High School’s swim team after running into his boyhood nemesis, Rin Matsuoka of Samezuka Academy.

Read this: SK8 The Infinity: Will It Have A Second Season?

Rei Ryugazaki is added to the team with his boyhood buddies Makoto Tachibana and Nagisa Hazuki. While the team prepares for tournaments, Haruka and Rin’s rivalry continues to sour because to Rin’s slow progress, despite his increasing desire to swim competitively.