This is one question every fan of Henry Cavill wants answered and does anyone on the internet actually know if he really unfollowed Warner Bros.?

What happened to Henry Cavill being Superman?

Well, if you ask us, we would tell Superman is Cavill and Cavill is Superman. It’s a role that is tailor-made for him, just like Marvel’s Ironman is for Robert Downey Jr.

But for some unknown reason, Warner Bros. decided to drop him out of the franchise. We have rumors that there will be a black Superman from now on, but nothing is sure, and we know Cavill is no longer Superman.

This upset the fans, and even with a lot of support from DC directors, Henry Cavill couldn’t retain his role.

That might be the reason why everyone thinks there is a feud between him and WB.

Well, that’s what we are here to tell you. So, all of a sudden, a fan noticed that Henry Cavill was not following WB anymore on Instagram. This ended up causing this whole uproar.

Also, they found out that WB is also not following Cavill on Instagram, and many think that WB unfollowed Cavill only yesterday.

Apparently Henry Cavill unfollowed WB on IG. I'm not 100% sure if he was following them on there to begin with but if so then all you can do is just laugh at this point lol.

How true are these claims, you ask? Well, nothing is. Already some level-headed fans have raised the question that if and all Cavill ever followed WB.

That’s one good question because there are many chances that he didn’t follow them, to begin with.

While many are still trying to find out what went wrong between Cavill and WB, this sure gives them another puzzle to solve.

But the reactions from fans are funny. Half of them are boiling over the fact that WB unfollowed Cavill while the other half is yelling and asking them to be quiet, saying this might just be something they will never know for sure.

Who ever went & searched who henry follows and because WB & DC didnt show up started this “he unfollowed” narrative your a 🤡 lol.

Obviously, Cavill will not be saying anything about this. If he did, it wouldn’t be professional so, fans are on their own here.

Well, needless to say, DC sure does have a bad way of handling stuff like these. 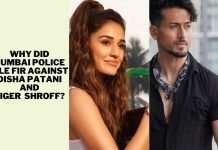 Why Did The Mumbai Police File An FIR Against Disha Patani And Tiger Shroff?