“Black Panther: Wakanda Forever” is the MCU’s next feature film, effectively closing out Phase 4. As the world still reels in the loss of Chadwick Boseman, many are wondering who will take up the mantle of Black Panther in the sequel film. The first trailer for “Wakanda Forever” gives us a sneak peek at the very end, showing someone in a new Black Panther suit from behind.

Surprisingly, there have been no leaks about who will be the new Black Panther, which is quite shocking considering how spoilers for “Doctor Strange in the Multiverse of Madness” and “Spider-Man: No Way Home” ran rampant the internet before their releases. That doesn’t mean that MCU fans aren’t speculating who the mysterious figure is at the end of the “Wakanda Forever” trailer.

According to a poll, the “Black Panther” that character landed at the top might surprise you.

Over 600 US participants took the poll, which showed that 21.36% of fans believe Okoye (Danai Gurira) is sporting the Black Panther suit. Okoye never takes on the mantle of Black Panther in the comics, but with the MCU loosely adapting many of their stories, anything is possible. 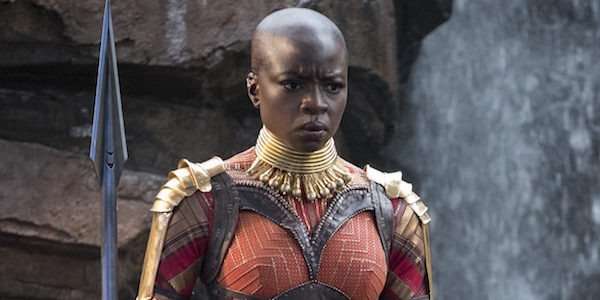 Okoye taking the top spot in our survey is quite the surprise, as many fans have theorized Shuri (Letitia Wright) will take the mantel in the wake of her brother’s death. The genius came in second, with 19.74% of poll-takers thinking she is the mysterious figure at the end of the trailer. This is canon from Marvel Comics, as Shuri becomes Black Panther during the “Dark Reign” era.

Landing at number three in the survey is Nakia (Lupita N’Yongo), with 18.77% of the vote. As with Okoye, Nakia never holds the mantel in the comic books, but many have felt she’d be a good contender for filling T’Challa’s shoes. Rounding out the poll is M’Baku (Winston Duke) with 15.86%, Killmonger (Michael B. Jordan) with 12.94%, and Queen Ramonda (Angela Bassett) with 11.3% of the vote.

It makes sense those three characters fell toward the bottom as M’Baku’s figure doesn’t seem to match the smaller-framed one we see in the trailer; Killmonger is (supposedly) dead, and Queen Ramonda just doesn’t quite fit the bill.

All will be revealed when “Black Panther: Wakanda Forever” lands in theaters on November 11.

Advertisement Marvel Studios is bringing more content than ever before in Phase 4, with a dozen projects having debuted in theaters and on Disney+ over the past 18 months alone. Even though many of those entries have yielded some incredibly positive results, some MCU fans have started to criticize the long-standing series for its increased output compared…