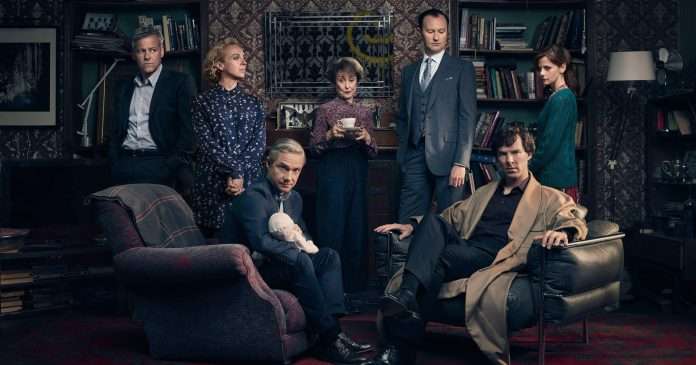 BBC Sherlock Season 5 is not officially renewed yet. Although season 4 ended with a cliffhanger, and that’s why there is a 100 percent possibility for its renewal. Some time back, the series creator Steven Moffat stated that it is unlikely for the show to disappear entirely.

In January 2014, Moffat stated that a fifth series had been plotted by himself and Gatiss; however, by the release of the fourth series in January 2017, they had not yet decided whether to produce it. Cumberbatch and Moffat, in particular, have expressed interest in continuing at some point in the future, but there are no immediate plans. As to the future of the series, Gatiss stated in January 2019 that due to the conflicting schedules of Cumberbatch and Freeman, a potential fifth series is still up in the air.

It is a highly anticipated series fans have been waiting for an extended period. All the four seasons of the famous British crime drama television series starring Benedict Cumberbatch and Martin Freeman won millions of hearts across the globe. Thus, just ending the show without showing the conclusions or solving the previous cliffhangers will be like breaking the hearts of many.

Unfortunately, Sherlock Season 5 will not be released in 2021. We will have to wait for some more time for Benedict Cumberbatch, and Martin Freeman-starring series as BBC reportedly does not want other projects to be hampered due to Sherlock’s returning.

Actors Are Giving Hope For The Audience

Further, Cumberbatch has revealed that the fifth season is a possibility. Here’s what he has to say:

“I’m the worst person to ask on this because I never say never, obviously. But I don’t know. And I’m the worst person to ask because my slate’s pretty, pretty full at the moment, as is Martin Freeman and all the other key players involved. So, who knows? Maybe one day, if the script’s right. And I say ‘the script,’ maybe it could be a film rather than the series. Who knows? But anyway, not for now,”

Benedict Cumberbatch, Mark Gatiss, and Steven Moffat are super busy with other projects, and that’s the reason they do not want to run the risk of ruining the show’s legacy by producing a subpar season. Anyway, indirectly, they have given the hints for the making of Season 5.”

However, the fascination surrounding Sherlock Season 5 continues, and many believe it would focus on Sherlock Holmes’s long-lost or secret sister Eurus Holmes. The series is expected to show more on the evil side, but nothing is confirmed yet, Latin Times noted.

On the other hand, Sherlock Season 5 will be concluding the Detective Inspector Stella Hopkins. The Walking Dead actress Eleanor Matsuura played Stella’s character. She was introduced in Sherlock Season 4’s premiere episode titled ‘The Six Thatchers.’ She’s been seen visiting Baker Street apartment and sending a notion to assist Sherlock, the character always played by Benedict Cumberbatch. But after that, as she was not invited, there lies a gap in the plot, making a reasonable chance for her in the series.

Moreover, Matsuura showed her interest in returning when asked if she would like to come back for season 5:

“I totally would! I love that show. “I’ve always been a huge fan of the show. I think it’s phenomenal. The actors, the writing, how it’s shot is so beautiful, and I had such a great experience. If Sherlock went again, I would be delighted to step back into it. I would.”

The fourth season’s last episode, The Final Problem, aired on BBC and Netflix in 2017.