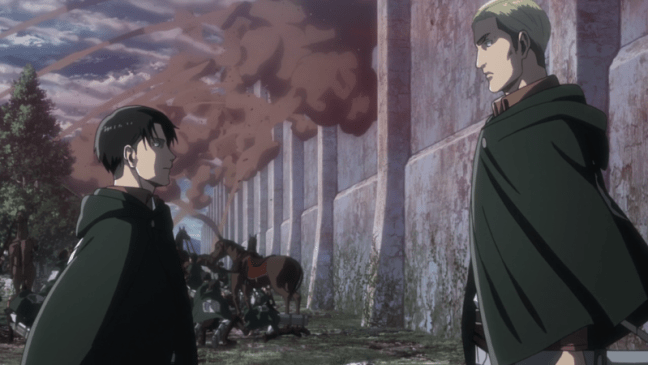 The Attack on Titan community has been incredibly divided over the question of saving either Armin or Erwin. Just imagine yourself in the shoes of Levi Ackerman, having to make this decision amidst the rage of both Mikasa and Eren. To be fair, it’s a dilemma that would never be resolved successfully.

To understand this debate in its entirety, let’s see this dilemma within that context. Also, let’s try to comprehend both sides and their arguments.

Armin Arlert had been severely injured after suffering heavy burns from the Colossal Titan’s heat waves. Though this gave Eren the perfect opportunity to defeat Bertholt, Armin was almost on the brink of death. At the same time, Erwin Smith had led a group of soldiers to their deaths after realising their inevitable defeat in either case.

The part where he gave his spine-chilling speech to motivate them was so emotional and tragic. He gave this speech though he was aware that they knew they’d die. This was a strategic ploy to get the Beast Titan occupied with murdering them by throwing crushed pieces of stones.

However, he was still found breathing, though his stomach had been ripped to pieces. When Levi decided to give the Titan serum to Erwin as he was more experienced, both Mikasa and Eren defied orders and attacked him. Their attempts at convincing Levi of Armin’s competency fell on deaf ears.

Levi ended up giving the Titan serum to Armin. Apparently, he didn’t want Erwin to go through the hell that he was miserably caught in. He wanted his beloved friend to get the peace that he knew would be better for such a tormented soul.

Since then, there has been a raging debate between the two brigades, who are steadfast in their stance.

Who should Levi have saved: Armin or Erwin?

This debate often resorts to “what-if” questions many times. There are some really interesting and insightful theories that transform the way we watch and think about Attack on Titan. 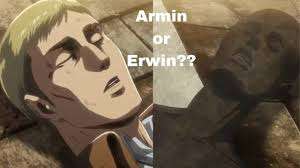 The pro-Armin camp posits that he was a better choice. Erwin himself wasn’t aware of what he would do once he found out the truth about his father’s theory. Though he was incredibly passionate about that truth, he saw that as an end rather than as a means. On the other hand, Armin, alongside Eren, dreamt of freedom, symbolised by their love for the oceans.

Floch, the Survey Corps member, was the one who found Erwin alive. His arguments about choosing Erwin are pretty solid. He says that though Erwin is the devil that took his comrades to their deaths, he is also the one who can save humanity. He is the only one who can give them their freedom from their hell.

Eren and Mikasa claimed that even Armin was a good strategist and tactician. They cited reasons like his ability to find the identity of the Female Titan. However, compared to Erwin’s confidence and years of experience, this argument falls apart.